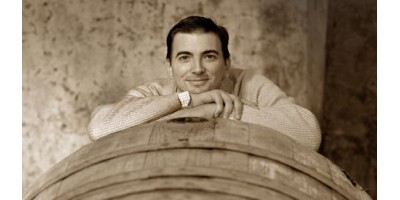 On our first visit the Azienda in the heart of the Piave we were very impressed. The farm buildings in the old part of the town of San Polo di Piave are all from the 19th CENTURY underts. This period also saw the establishment of the Agriculture of the Azienda Giol and the construction of the impressive Castello falls. Viticulture began the great-grandfather Vittorio Carraro but in Argentina, where he had built the then largest vineyard in the world. This came back from the early 20th century Argentina and built the wine cellar of Cantina on. The once thriving wine but was neglected in recent decades giol, in favor of other agriculture (mainly sugar). The farm buildings were gradually abandoned and neglected over time. Only at the beginning of the 90s the whole estate has been revegetated. The basement facilities were very engaiert resurfaced and completely replanted the Rebbe as with local vines. The Carraro family is devoted to organic viticulture. To currently about 20 ha of winemaker and oenologist produce excellent wine. The proceeds of the sales hike in coming years almost entirely in new investments in the cellar and vineyard, to further increase the production and to ensure a high quality and investment in modern technology.
Winzer: Vittorio Carraro
Gesamtanbaufläche: 33 ha
Böden: Lehm
Bio seit: 1987
Rebsorten: Merlot­(6 ha), Chardonnay­(3 ha), Sauvignon­(1 ha), Cabernet Franc­(1 ha), Pinot Grigio­(6 ha)
Raboso­(1 ha), Glera­(14 ha), Pinot Bianco­(1 ha)

fixed & mineral
nevertheless Ultatrocken tasty and refreshing .
Violet , ammonium chloride and blueberry with a touch of green pepper in the mouth .
Without additional zugefürtem sulfur !

-9%
fruity & harmonic
Kirschig-slim Merlot nor the sulfur was added in the vineyard in the basement. Fully fermented, the wine still impresses with fruity-fresh and charming nature.
7,50 €
including 19% VAT. , plus shipping
10,00 € per 1 l
Available now!

strong & full-bodied
An especially successful , black red Cabernet from the humid lowlands of the Piave . Spicy tannins in admirable cooperation with vanilligem Barrique game, in which the wine matured for several months .
10,60 €
including 19% VAT. , plus shipping
14,13 € per 1 l
Available now!

full-bodied & elegant
The Venetian classic with soft, expressive sweetness. For those who like it quite as dry pizza and pasta not.
7,70 €
including 19% VAT. , plus shipping
10,27 € per 1 l
Available now!

Winter22
COPY KUPON
No thanks! I pay the full price.