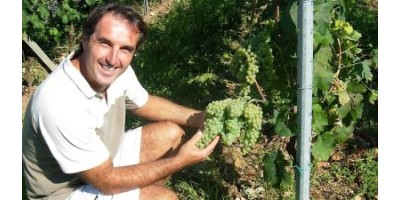 The DOP Lugana is exclusively for white wine is vinified from the local clone of Trebbiano, Trebbiano diLugana, a synonym of Trebbiano di Soave. However, the soils in the DOP Lugana on the southwestern tip of Lake Garda has a strong impact on volcanic and give the wines a little more flavor than the ready Soave is usually develop. What the simple Lugana Bianco Pratello suggests, is exceeded by the mineral and floral Lugana Catulliano.
But what a surprise when one during a visit to the Cantina middle of a small historic village core, the entire range of wines (and boiled with love fruit purees) are presented. On the paths of Amarone di Valpolicella wines are here in a similar way from Cabernet Sauvignon (Ripudiato) and the Rebo grapes vinified (Nero per Sempre). The Rebo is a cross between Merlot and Teroldego grape, its origin lies in the Valtellina. The wines are deep, schwarzbeerige, slightly sweet powerhouses that call for an opulent meal, which should ideally be followed by continued a cozy gathering with friends. Despite all the skill in the Cantina Vincenzo is irrevocably out that good wines are not made ??in his basement, but instead are exclusively the result of careful and biological management of 31 hectares of vineyards.

strong & full-bodied
High Interestingly wine with vibrant contradictions! But fruchtsüß full
Herbs, eucalyptus, lovage. Charming and biting at the same time. a little
Bitter chocolate in the finish. From the varieties Marzemino and groppello.
12,50 €
including 19% VAT. , plus shipping
16,67 € per 1 l
Available now!

bodied & elegant
Very typical of northern Italy : powerful and spicy with delicate acidity and
much play . Cherry and dark berries on the palate, the finish clear red
Currant , some marzipan , the long barrel storage integrated almost completely .
Much extract without heaviness .

fruity & fresh
Bodied and creamy, with a strong hint of plum, quince and pear. The Trebbiano Lugana is rather decent in the acid and yet offers wonderful freshness. It looks forward to the next sip!

fresh & easy
Soft and easy to drink. Red berries with the melting can be expected of an excellent rosé. A spring wine all year round!

Winter22
COPY KUPON
No thanks! I pay the full price.