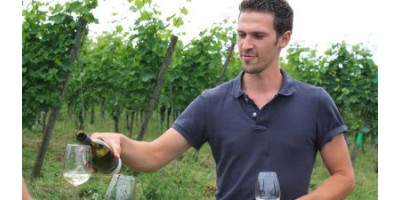 "In harmony with nature, we want to produce individual wines with personality, charm and character. Each wine tells its own story and is so distinctive," says Philipp Rieger. The Rieger Family Winery is located almost in the center of the small town Markgraefler Betberg and currently houses four generations. Originally a mixed operation, the Rieger increasingly specialized on viticulture and in 1986 opened the doors of its ostrich industry. Today this is one of the oldest wine tavern in Markgraeflerland. When Philip Rieger in 2005 entered the parents' vineyard, the vines have been converted to organic viticulture. Even then, Philipp Rieger began while working in Wingert reflect on further steps and increasingly oriented to bio-dynamic criteria. Today the winery is Demeter certified, with Philipp Rieger communicates a very down to earth approach to the idea of ??biodynamic agriculture.
Very pleasant and graceful to show the wines of the winery. Only moderate alcohol content, the premise that whites are charming and reflect the flowers of summer against vineyards. Even the Reds are expanded and discreet elegance, wood notes are only the finishing touches to the mature red wines.

-6%
full-bodied & elegant
Blend of spicy style with aromas of cloves, juniper berries and sour cherries. This lively, stimulating and easy to drink

full-bodied & elegant
Wonderful wine, mineral, not as fat as others Chardonnays, clear pressure on the palate, white peach, with just that
correct acidity for freshness.
At table almost universally applicable.

fruity & harmonic
Freshness, freshness, freshness! This white burgundy convinces with its nose
fruity style. The aromas are reminiscent of lemon, green apple and apricots. At the
Palate and finish the wine shows a beautiful freshness and minerality.
Goes well with antipasti, seafood, fish, vegetables

Animating and fresh
Gentle filtration during reverse osmosis leaves many of the wine's aroma
in the wine despite the almost complete alcohol reduction. Riesling, Müller-Thurgau
and Muskateller give juicy aromas, freshness and fragrance.
Goes well with fish, seafood, as an Aperitif!

Animating and fresh
Gentle filtration during reverse osmosis leaves many of the wine's aroma
in the wine despite the almost complete alcohol reduction. Riesling, Müller-Thurgau
and Muskateller give juicy aromas, freshness and fragrance.
Goes well with fish, seafood, as an Aperitif!

fruity & harmonic
Juicy and fresh, while Baden-typical stocky, but never heavy. Concentrated
and clearly drawn aromas of apples and peaches.

HERBST2021
COPY KUPON
No thanks! I pay the full price.